Medals all around for Year 10 Physicists 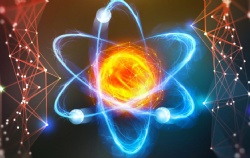 Well done to everyone in 10e/Ph1 for a strong class-wide performance in the British Physics Olympiad. Special mentions to Amelia and Vania for achieving a Silver award!

The Year 10 British Physics Olympiad consisted of two rigorous papers containing content that they have been taught, content that they are not familiar with and some general knowledge in and around the area of physics.

Eighty per cent of students taking part nationwide medalled with Amelia and Vania's scores putting them in approximately the top 30 per cent of Olympians.​