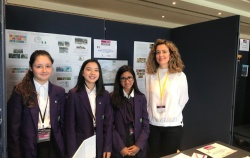 The event was exciting and we met students from schools from all over the UK. The quality of the work was outstanding and the students did extremely well representing our school. The Ricards Lodge team, from Year 7, was the youngest year group present so they deserve many congratulations for the huge achievement of reaching the finals.

We did not win in our category (Design and Construction) however,  the girls impressed the judges with their presentation and received great feedback. The lead judge and mentors are Industry professionals who work in companies that sponsor and support Teen Tech which include companies such as Accenture, Atkins, BT, FDM Group, GSK, IL Group, RBS, JVC Kenwood, Lloyds Banking Group, Rolls-Royce, Symantec and many more.

There were also a few Tech-celebrities who attended the awards and presented in various categories.  Some of the Tech celebrities that attended the event this year included: